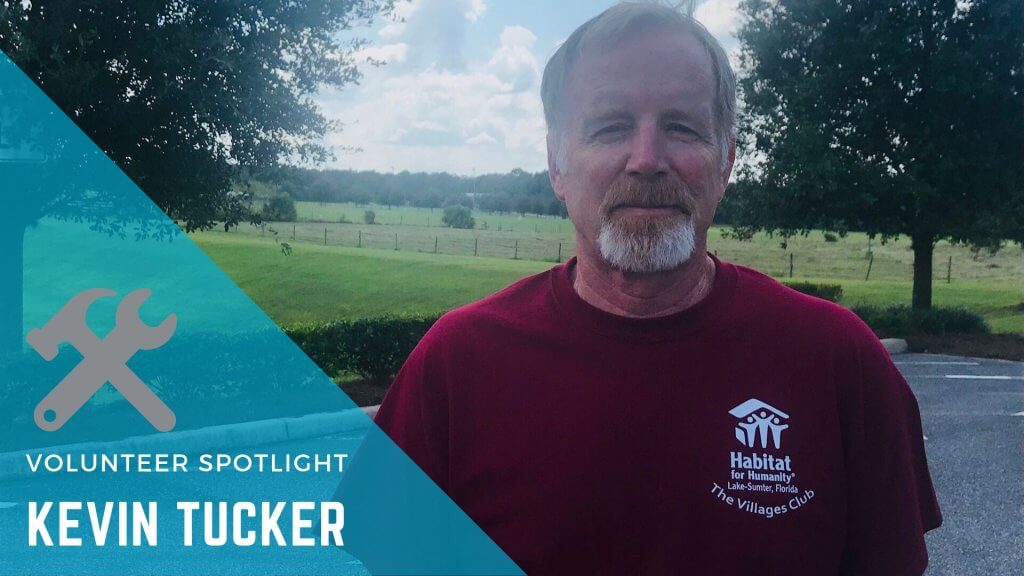 Kevin Tucker has been a man of many trades throughout his life, but none have held on to his interest more than managing and rehabbing real estate. Now, the transplant from New York plans to bring his passion for property management to the Lake-Sumter chapter of Habitat for Humanity by starting a club in his adopted hometown, The Villages, FL.

Tucker, a part-time motorcycle enthusiast, has worked on oil rigs in the Gulf of Mexico, drove a taxi, worked as a driving instructor and owned a laundromat, a dog wash and a large records storage company, all before venturing into the world of investment property while still in New York.  There, he owned several properties which he enjoyed updating and where he did his own repairs. “I did everything I could myself, except the HVAC, which I contracted out,” says Tucker who also noted that he comes from a family full of roofers, siding hangers and construction workers.

Tucker worked with a local chapter of Habitat in New York and picked up where he left off with his volunteerism when he moved to Florida. He noticed the potential right away, with more than 100,000 retirees in his new hometown, many of which would have skills or interest in helping out at Habitat, but he also noticed something peculiar.

“I’d run into people from the Villages at every Habitat build or function I attended,” says Tucker. “I’d see them once or twice and then they’d disappear.” Tucker believes that shows there’s plenty of interest among his fellow Villagers but, without a structure or format to keep them engaged, they likely become disconnected once their build or volunteer opportunity ends. Tucker plans to create that engagement with the Habitat Club and he’s already seen plenty of interest.

“I have about 40 people who’ve expressed interest in joining the club, just through word of mouth,” says Tucker who also noted that those joining don’t necessarily have or need a construction or trade background.

Tucker says they’ve already got their first assignment, once the club is up and running. “We’ll be assessing a couple of the Habitat Re-Stores to see how we can refresh them and update some of the landscaping.” The Villages Habitat Club will also be cutting playhouse materials for a new event, “Jingle Build-Off” in December.

Ultimately, he’d like to see the club tasked with their own build and have the club’s name attached to a house they complete in one of the surrounding communities. Until then Tucker says the club members will be available to Habitat in any way that benefits the organization and engages the club’s members.

If you are interested in learning more about The Villages Habitat Club, you’re encouraged to contact the club at VillagersHabitat@aol.com. Their first meeting will be held at the Sea Breeze Recreation Center at 6 p.m. on Wednesday, October 9th and Tucker says anyone interested is welcome to attend.