Villagers construct house for local mother who dreamed of a home 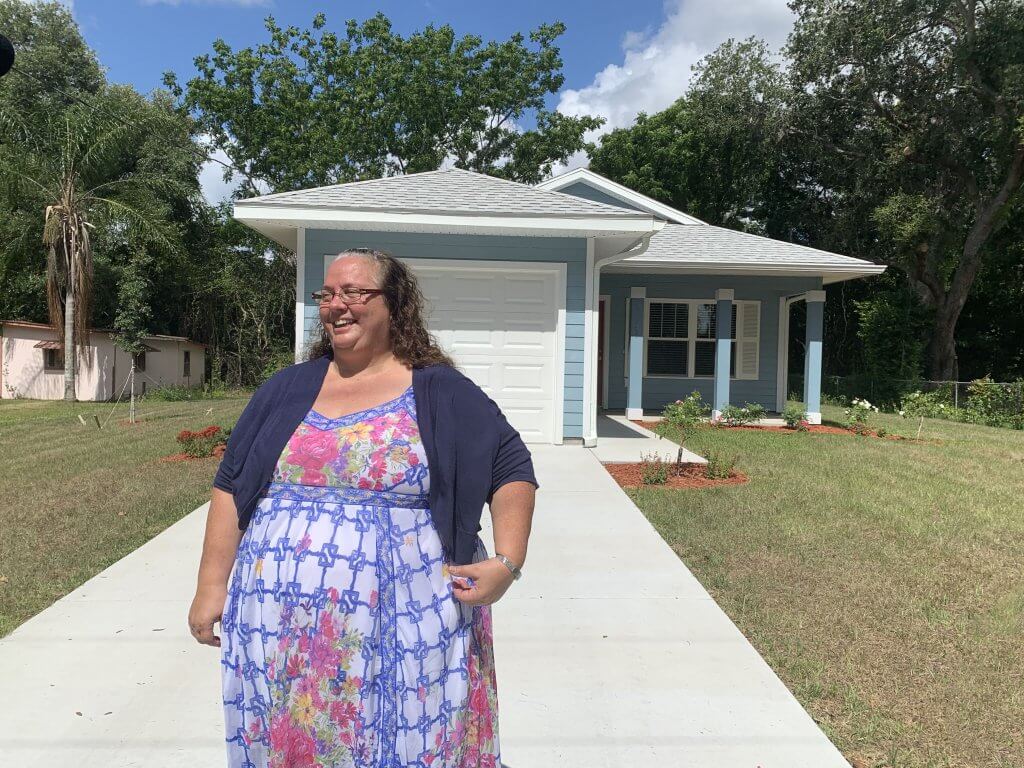 While raising her five children, one of whom is developmentally disabled, single-mother Joyce Tohill struggled to make ends meet.

Housing was always a problem and the dream of a home for her family seemed out of reach. Tohill had learned to be a medical transcriptionist so she could work from home and care for her disabled daughter.

Tohill had always taken an interest in Habitat for Humanity and volunteered for the organization. When The Villagers Habitat For Humanity of Lake-Sumter Club named her as the recipient of a new three-bedroom home to be built by club members, she was overwhelmed.

As she received the keys to the house on Tuesday morning from Villager Sandy Read, Tohill began to cry. She told the Villagers who worked on the home that she was “so grateful for making her dream come true.”

Last November, Tohill, her daughters and her grandchildren were present when Habitat for Humanity held a ribbon-cutting ceremony at the beginning of construction.

“At that time it seemed to be a far-off dream,” Tohill said.

But as construction continued, her excitement grew as did her affection for the Villagers who worked hard to finish the house.

Read the full article by David Towns, The Villages-News

Karen LeHeup-Smith, a volunteer with LEASH, Inc., says it happens all too often that families surrender their pets to the shelter or, worse, have the animals euthanized when veterinary bills become too much.

Lake County-based LEASH offers financial support to shelters, animal rescues and partners with other organizations to assist private individuals to help with a pet’s veterinary care.

“Since 2015, we have spent more than $140,000 to assist with veterinary care, heartworm treatment, microchipping and spay and neuter procedures in partnership with local shelters, animal rescues and for clients of our partner veterinarians. This includes a trap-neuter-release program for feral cats managed by the Lake County Animal Shelter,” said LeHeup-Smith. “We rely on donations and grants to sustain our services. While we have little overhead in our volunteer-run organization, the demand for these animal procedures keeps growing.”

“Twenty-eight Lake County charities, ranging from very large to grassroots, have a chance to earn their share of $85,000 that the Mount Dora Community Trust will provide in matching funds,” said Rob English, Executive Director of the Mount Dora Community Trust. “We will offer a dollar-for-dollar match to all participants until the first $10,000 is donated. After reaching that $10,000 milestone, the organizations will compete for additional matching dollars based three winning levels.”

Donations will be accepted online beginning at 9 a.m. on November 30 at https://mountdoracommunitytrust.com/givingweek. Cash or checks made out to Mount Dora Community Trust, with a memo of the donor’s chosen organization, must be received by mail or dropped off at 821 North Donnelly Street, in Mount Dora by 4 p.m. December 7.