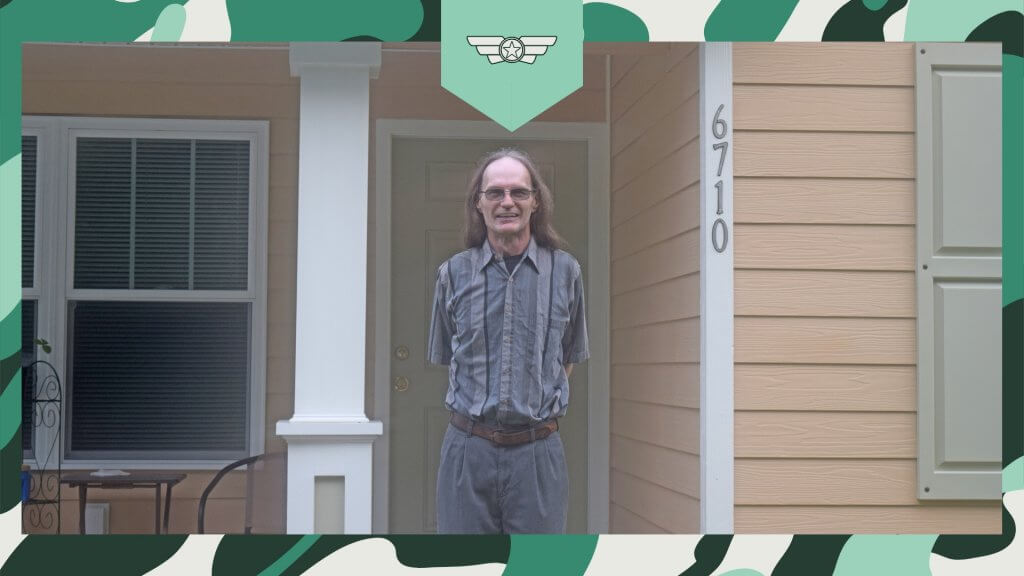 November is a time to honor our Veterans and those who have sacrificed so much in service to our country. As part of our Veteran’s Housing Initiative, we serve veterans through our Home Ownership program and through Preservation and Repair. Here, you’ll get a chance to meet veteran, Eddie Broglin and learn what’s next for our Veterans in Lake and Sumter Counties.

Born and raised in Florida, Eddie Broglin is a true Florida Native. When speaking to Eddie about his home state, you can barely mention a new place before Eddie tells you his connection to that area; Lake Wales, Bartow, Lake City, Fort Pierce, it becomes apparent very quickly that Florida holds a special place in Eddie’s heart.

After graduating high school, Eddie Broglin was faced with the challenge of what he was going to do next. A fellow classmate told him that he was going to join the National Guard and convinced Eddie to sign up as well. Stationed at Wauchula, Florida where he worked with gunners and as a mess cook, Eddie then moved to the Naples Armory where he went on to serve an eight year career. While Eddie learned a lot from being in the service, he unfortunately suffered a heat stroke that would have a lasting impact on him the rest of his life. After his military career, Eddie moved around the state, and left feeling un-grounded while staying with friends or renting, he decided it was time to find a home of his own.

Eddie describes his experience of working with multiple real estate agents and exhausting his resources through Veterans Affairs, his search for a home appeared hopeless. “I was looking for a studio apartment, but mortgages and rent have flopped. Now it’s cheaper to pay a mortgage than to pay rent,” says Eddie. Eddie describes an experience that is relatable to many and sits at the very heart of Habitat for Humanity Lake-Sumter’s mission.

Eddie decided a “tiny home” would provide the best solution to affording a home of his own and started to search out of state, believing he would have to move from Florida in order to find affordable housing.

Finally, Eddie met real estate agent, Maureen Campbell. Maureen knew about Eddie’s desire to stay in Florida and his interest in “tiny homes.” With these two requests in mind, Maureen suggested Eddie look into Habitat for Humanity as a resource and facilitated the process for Eddie to apply to be a homeowner with Habitat Lake-Sumter. A cottage-style home currently being built in Coleman, Florida was THE home Eddie had been searching for.

While discussing his newly built home, it’s evident how grateful Eddie is to be able to be a part of the Habitat Lake-Sumter’s home ownership program; a home he believes is built with love by the staff and volunteers who have put “their heart in to it.”

“The first thing I did was plant my red maple tree,” a tree Eddie bought when he first learned of being accepted into Habitat for Humanity Lake-Sumter’s home ownership program, “to symbolize being rooted here,” says Eddie. In this quiet community in Coleman, FL, balanced by rural and growth; Eddie has found a place to plant his roots a little deeper into Florida.

If you’d like to know more about the work we’ve done with Veterans this year, come visit Habitat for Humanity Lake-Sumter’s booth at the Villagers for Veterans Film Festival on Wednesday, November 6th.