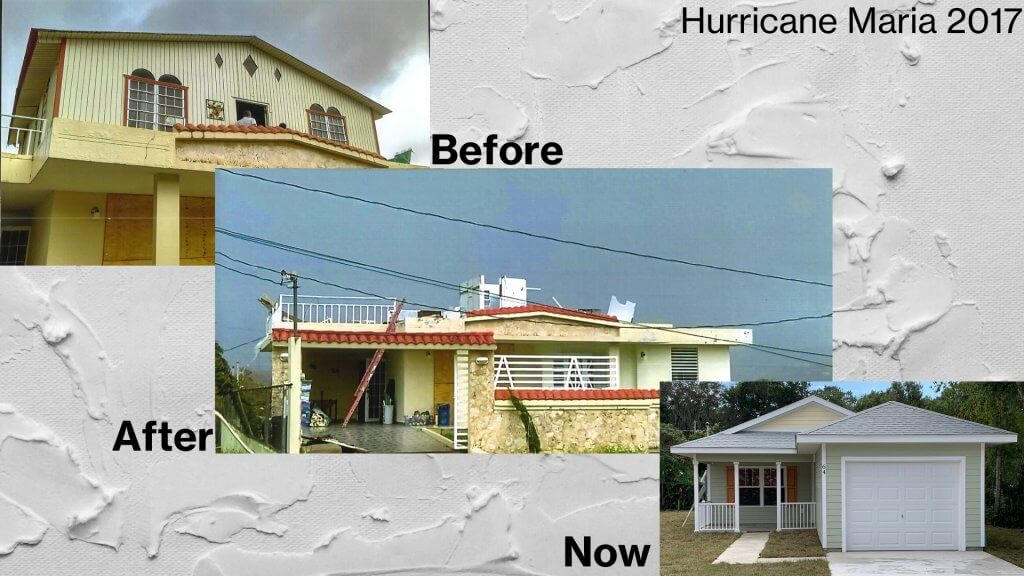 “We looked out the window and watched our walls tumbling down our stairs,” says Lorie Lozada.

Lozada, originally from New York, watched in horror with her family as their house was torn apart in front of their eyes as Hurricane Maria, a category 5 storm, ravaged Puerto Rico in the fall of 2017.

“After my father passed away in ‘96, my mom moved back Puerto Rico to be closer to family” says Lozada. “When my mother had a heart attack three years later, my daughter Alexandra and I moved to Puerto Rico to take care of her.”

That’s where Lozada says she met her husband James. “By the time my mother passed away, I’d met James and we had a son, Jianluc.” So, rather than move back to New York when her mother passed, Lozado’s family built a life in Puerto Rico.  There they lived in a second story wooden addition, built above her mother-in-law’s concrete home.

“When the storm hit, we thought we were prepared,” says Lozada. “We had canned goods, gas, water, enough supplies for 8 or 9 days.” But the storm was much worse than they could have imagined.  “I’m from New York, I’d never seen anything like this, it was horrifying,” said Lozada who says she can remember the terrible noises coming from above as they hunkered down in her mother-in-law’s home.

Peering out during the storm, Lozada recalls seeing her refrigerator falling to the ground just outside of the window. “The wind picked the fridge back up, ripped it in two, and sent the doors flying in one direction and the rest flying in the other.” When the storm finally past, Lozada says their home was destroyed and, because her mother-in-law’s home sustained damage as well, they could not rebuild the second story addition. “One of the walls of our home was blown onto our car. We lost everything except for a few mementos and some clothing we had time to grab.”

“FEMA assessed the damage and our situation and offered us some help, including airfare to the United States.” As a territory of the U.S., citizens of Puerto Rico also have American Citizenship by birth so coming to the U.S., where both Lozada and her husband have family, was an option but it wasn’t an easy decision.

The couple’s son had grown close to Lozada’s daughter Alexandra, and her husband’s son Kevin, both of which chose to stay in Puerto Rico, making their decision to leave even harder.

“We sat down and prayed and prayed as a family,” says Lozada. “We’re big on our faith and we put everything in God’s hands.”

Rather than going back to her home state of New York, they chose to relocate to Florida where her husband has cousins and extended family. Lozada says the transition wasn’t easy but she’s incredibly grateful for all the organizations that have lent them a hand in their time of need, including Habitat for Humanity of Lake-Sumter.

“After living in a hotel for a while, we eventually settled into an apartment in Eustis,” says Lozada. While they were looking for housing, one of James’ cousins encouraged the family to apply for help through Habitat. “Once we were contacted by Habitat, we still weren’t certain we be able to make it work. We really had to work with a lot of agencies to tie it all together.”  The Small Business Association, FEMA and help from Habitat Lake-Sumter all played a role in helping Lozada and her family qualify for a home through one of Habitat’s programs.

“It’s a pale green bungalow with orange shutters,” says Lozada. “When you see it in person, the colors work beautifully together.” And she’s seen the property often, living within walking distance now, Lozada passes by her future home on a daily basis and says it should be ready any day now.

Lacie Himes, Development Coordinator for Habitat for Humanity of Lake-Sumter, says construction on Lozada’s home began last spring and was made possible through the fundraising and volunteer hours of the organization’s Women Build program. Himes says the Inmate Construction Academy also played a significant role in completing the house, bringing together two of Habitat’s most successful programs to build a new home for Lozada and her family.

Two years ago, Lozada and her family were preparing for Hurricane Maria. This fall, they’re looking forward to a different kind of chaos.

“We’re hoping to be in our new home before Thanksgiving,” said Lozada who plans to start their own traditions, bringing together influences from both Puerto Rico and the United States. “We’re planning to share the holidays with lots of friends and family, bless the house with everyone in it and have a big, crazy Thanksgiving!”

You’re invited to meet the Lozada’s and celebrate with them as we dedicate their home on Friday, November 22nd – Contact Shari for details and to RSVP: Shari@HabitatLS.org or (352) 483-0434 x 118