A Month of Maritime 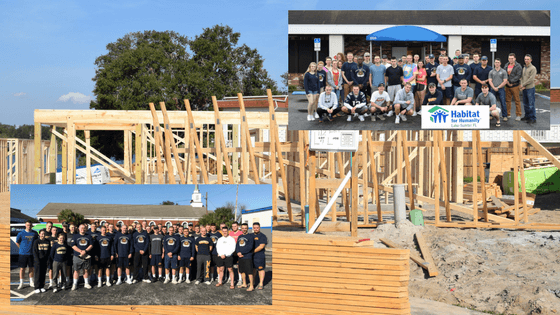 Discipline, Knowledge, Leadership. This is the motto of the Massachusetts Maritime Academy, and for four weeks their students put those words into action.

Beginning January 16, groups of 40 students from MMA cycled through each week. They spent their weeks on Habitat job sites, working with our staff to make significant progress across the board. The students come from varied backgrounds but have similar goals at the Academy; despite the differences, all were looking forward to the team-building their time here would develop. Their academic plans spanned multiple subjects: emergency management, engineering, international business, and more. Many said the lessons in communication and teamwork learned on-site would prove invaluable moving forward. Maritime students that worked with Habitat during this time were pulling double-duty; in addition to their time on-site, they also continued studying when not actively working.

The students attending under this program began work on the Veterans Village last year, and this year’s attendees were eager to pick up where they left off. We put most of the cadets to work on the Village; the rest were taken to Preservation and Repair projects. A special event happened for this group as well, assisting the Clermont Police Department in painting a large community of duplexes. This created a strong level of community involvement, from officers to homeowners to businesses, and helped inspire us to begin our neighborhood-focused initiative.

The construction teams for Habitat for Humanity of Lake Sumter know how fortunate they are. These passionate and hard-working students show up to help, year after year, and it’s a major boost to productivity. The amount of progress made would not be possible without them, and we hope we provided some valuable experience in return.

Thanks, cadets! Same time next year?

Check out our Youtube page to watch the interviews of from some of the cadets!