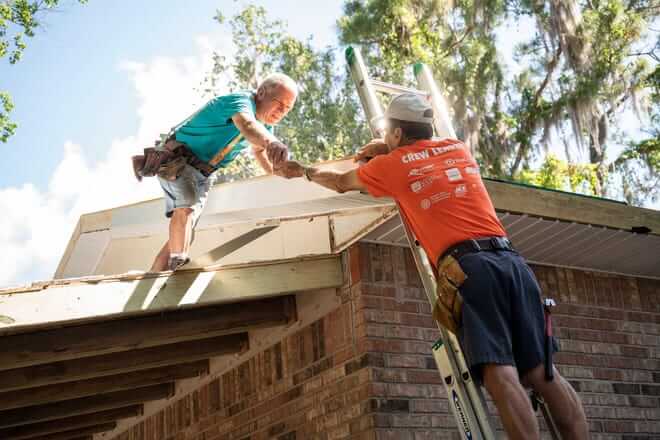 Volunteers from Habitat for Humanity work on repairing siding on the roof at the home in Leesburg. Cindy Peterson/Correspondent

LEESBURG — After years of insurance claims and patching leaking roofs, Leesburg veteran Kory Eureka and his family are finally getting a new roof thanks to the Owens Corning National Roof Deployment Project in partnership with Habitat for Humanity of Lake and Sumter.

“We partner with Habitat for Humanity to give back to veterans who have served our country,” Travis Foster of Owens Corning said. “We donate all the materials for the job and connect with one of our platinum contractors to do the work. Giving back, especially to veterans, is very meaningful. It’s a privilege and an honor to us a company to give back and this is just one way we show it.”

Eureka and his family were chosen for this specific project due to the extensive damage of the home on Linda Lane in Leesburg.

According to Justin Blandford of Batterbee Roofing, not only was the entire roof removed, but most of the plywood and trusses underneath had to be replaced as well. Habitat for Humanity will also be repairing the inner walls, cabinets and flooring where the leaks have rotted the wood or caused mold.

“The roof was in disarray,” Blandford said. “It had been tarped for about three years with several insurance claims that had been denied and resulted in many damages within the home. So, we were thrilled to be a part of this. We’re always looking to help out our community and especially someone who has severed in our military.”

Eureka and his wife live with his grandparents, Hank and Joan Marie Kanczurzewski, whose home was damaged during a hurricane while Eureka was deployed to Afghanistan in 2014.

According to Joan, the insurance company took a year to get the check to fix the roof, but a second hurricane struck the same day and damaged it even further