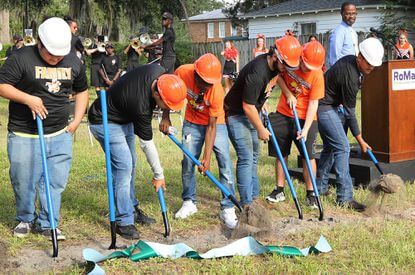 Leesburg High students put the shovels in the ground during groundbreaking ceremony for a joint project of Habitat for Humanity and Leesburg High School’s Construction Academy on Monday, Aug. 26, 2019. Students will work alongside professionals to build a home for a family in need on 12th Street in Leesburg. (Rosemarie Dowell/Orlando Sentinel)

LEESBURG — A dozen Leesburg High School students will be doing more than math equations, English essays and science experiments this year. They’ll be constructing a home from the ground up, too.

The three-bedroom, two-bath home will be built near downtown Leesburg for a family in need as part of a unique partnership between Habitat for Humanity of Lake-Sumter and Leesburg High’s Construction Academy.

Groundbreaking took place Monday at 107 N. 12th St., with a throng of state and local elected officials, business leaders and members of the community showing support for both the project and the academy. The vacant lot was donated by the city.

“This is great — the students and Leesburg High School needed it, the city of Leesburg needed it and the community needed it,” said Don Magruder, CEO of RoMac Building Supply and chairman of the academy’s advisory committee.

Roughly 100 students are enrolled in the academy, and the 12 students participating in the build were chosen based on their performance and leadership in the classroom. Each was required to have at least one year of construction classes.

“They are really a great group of talented kids,” said Lynnea Weissman, project manager with the Lake County school district’s office of College and Career Readiness. “It’s an opportunity for them to give back to the community.”

During the roughly eight-month project, the students will work alongside Habitat’s construction staff and professional tradespeople. They’ll use skills they’ve learned in class to work on every phase of the build, including the foundation and framing, electricity, plumbing, windows, doors, flooring and painting.

Senior Max Acosta, who is in his third year at the academy, said he walked into the academy during his sophomore year and fell in love with the program.

“It makes me feel really good to work on a project like this,” he said. “I’ll have a well-paid job after high school, too.”

Click here to read the full article by By Rosemarie Dowell, Orlando Sentinel