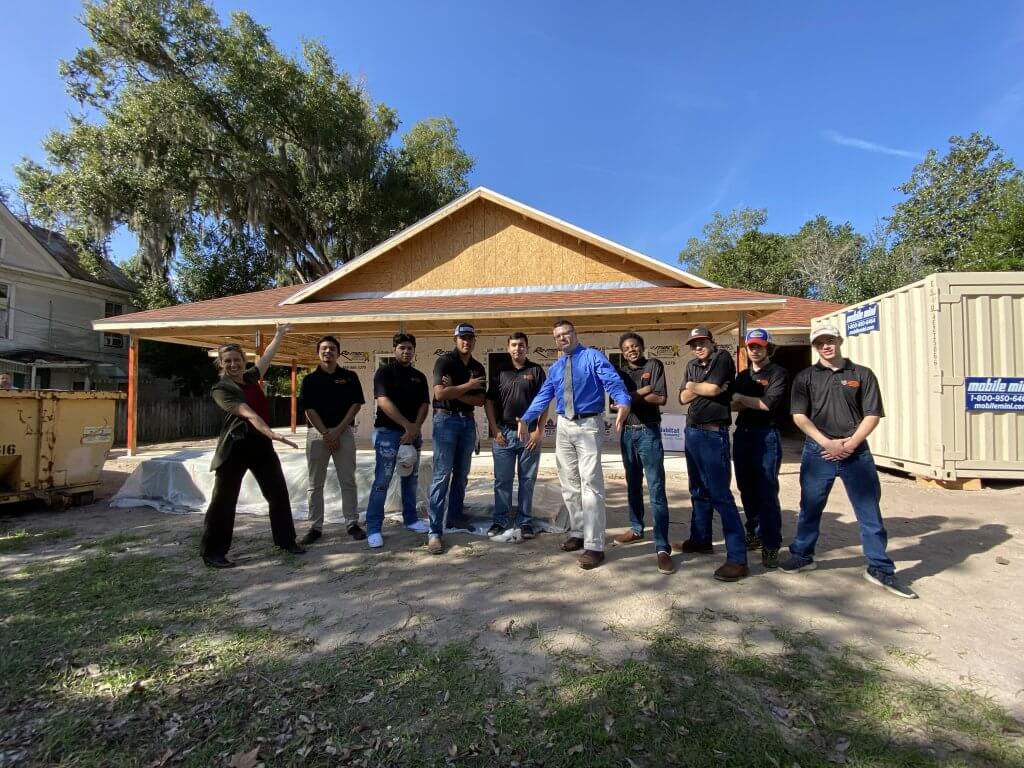 Leesburg High School construction students showed community members around the home and guests wrote positive messages for the eventual homeowners. The rest of the house will be built out in the coming months.

LEESBURG — Leesburg High construction students celebrated with their community Friday at a dry-in ceremony for the house they’ve been building with Habitat for Humanity Lake-Sumter since the start of the school year.

Dozens of community members and partners attended the dry-in, held in the partially built home at 107 North 12th St. to mark the completion of the home’s outer shell and the beginning of interior work for the students

“I loved seeing it, piece by piece, come together,” construction student Abraham Ledesma said during a brief tour of the home’s undeveloped interior.

Ledesma said it was the first time he’d ever gotten to work on such an expansive and satisfying project even having worked construction with his family in the past.

He pointed to the back wall of the house — the first wall they lifted into place — and began pointing to the different rooms, which included multiple bedrooms and two bathrooms.

He talked about the features of each room as though the wooden framework had already been walled off and he could see the finished product.

One sheet of drywall was set for the celebration as members of the community wrote positive messages on the inside and school district officials including Superintendent Diane Kornegay and board members Stephanie Luke, Bill Mathias and Sandy Gamble drilled the first screws.

The rest of the house will be filled out in the coming months.

Ledesma was happy, and surprised, with how much of the house he and his fellow students got to build. At first, he thought they would mostly be watching and chipping in on small things.

He said every part of the project, save for the air conditioning and electrical work, had at least one students’ hands in it, and most of the work was done independently: they’d get their instructions and be trusted to get it done.

The dry-in was also the first time the community was introduced to Bryan Russ, a 1996 Leesburg High graduate who just took over the construction academy from Jim Ellwood at the end of the fall semester.