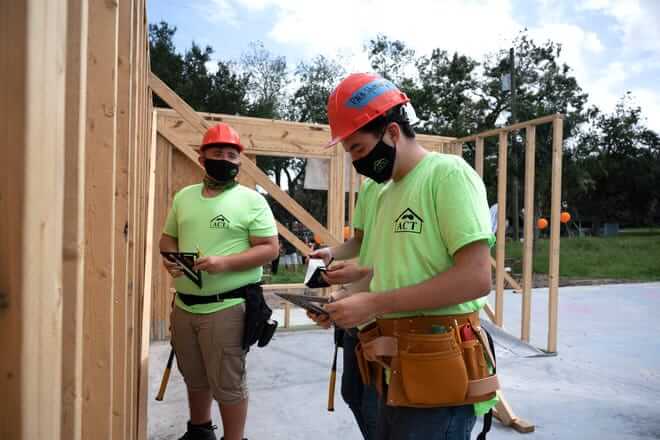 Students from the Leesburg High School Construction Academy work on constructing a home for Habitat for Humanity in Leesburg. [Cindy Peterson/Correspondent] Cindy Peterson

LEESBURG — Leesburg construction students took their first steps into their next housing project Monday as they met with the future owner of a Habitat for Humanity home on 1501 Grove Ave. in Leesburg.

The 14 students will be building the program’s second house in partnership with Habitat for Humanity Lake-Sumter, though for each of them it is a first — students are hand-picked to be on the team from LHS construction academy seniors.

Russ added that he’s really confident not only in their skills, but in their ability to work as a team and to work through any conflicts, which will be key in keeping the project moving.

The project generated a great deal of excitement not only for the team, but for the new homeowner, Jessica Smith, who has already been selected by Habitat for Humanity Lake-Sumter this year.

She attended a small, socially distanced event to kick off the home build on Monday, where district officials gathered to encourage students and thank Habitat for Humanity of Lake and Sumter for providing the opportunity for the students to work.

Smith, along with her son Otto, will make a home out of the new house after

Smith has never been a homeowner, she said, and she and Otto, who is 13, have had to move a total of 13 times since he was born. The home he was taken back to after his birth was destroyed in a tornado in 2007, and they’ve lacked stability since.

That stability is one of the things they’re looking forward to most.

“Moving around house to house, it feels good to be living in a single spot for the rest of my teenage years,” Otto said.

“We are very blessed for this opportunity,” his mother said, looking over at the framework of the house.

Smith added that she was excited to have students working on the project, and was glad that people would be using her future home to further their education.