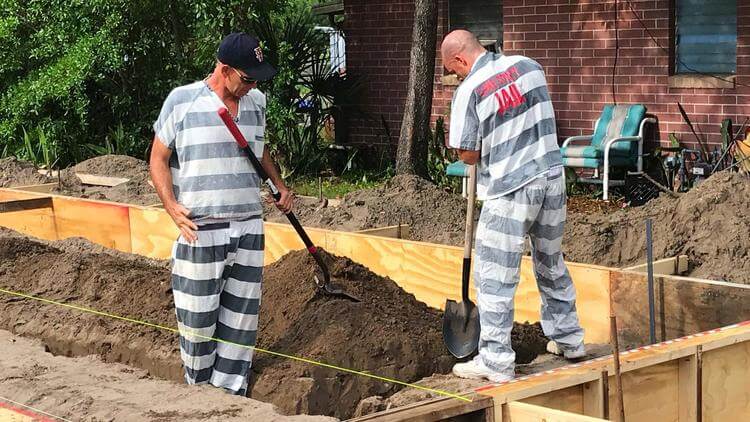 Chad Johnson, left, and Jared Hainey, inmates at the Lake County Jail, dig ditches that will be used to install plumbing for a home under construction by Habitat for Humanity of Lake-Sumter. (Martin E. Comas/Orlando Sentinel)

When Carlos Angulo leaves the Lake County Jail as a free man in the coming months, he will carry with him newly-learned construction skills — including painting, plumbing and flooring — that he hopes will land him a job.

But more importantly, Angulo said, he helped build an affordable home for a family in need while learning those skills.

Angulo, 20, is among half a dozen Lake County inmates who have started building a home on West St. Louis Drive in Eustis for Habitat for Humanity of Lake-Sumter as part of the new Inmate Construction Academy, a jail work-release partnership with the Sheriff’s Office comparable to other efforts around the country.

“I like doing this kind of work,” Angulo said Wednesday as he took a break. “I hope to eventually get a job in the construction industry with the skills I’ve learned….And it gets me out of the jail.”

He and the other inmates were installing water and sewer lines on the home site before the concrete for the foundation is poured in the coming days. The three-bedroom, two-bathoom home should be completed in about six months.

Using inmates to build homes for Habitat for Humanity has been successfully implemented for years in other parts of the country as a way to reduce recidivism.

In 2015, the Habitat for Humanity Capital District and the Albany County Sheriff’s Office in upstate New York launched a similar jail work-release program.