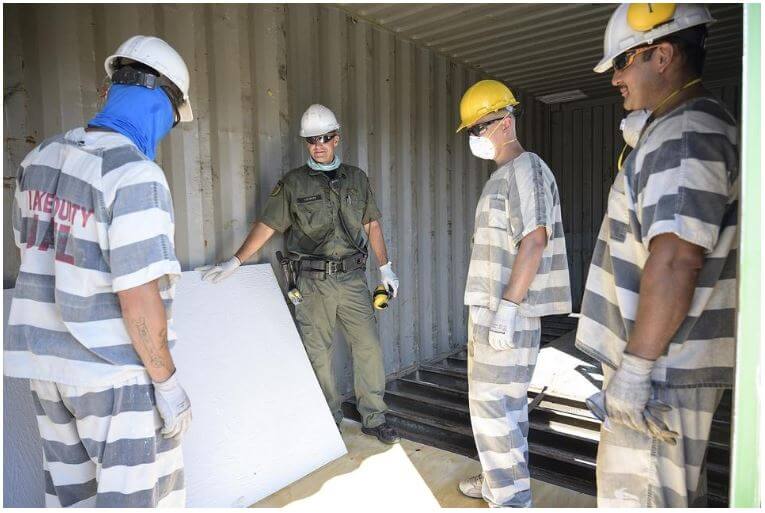 Habitat for Humanity of Lake-Sumter is working with local partners and inmates with the Lake Inmate Construction Academy to convert two shipping containers into temporary shelters for aid workers in the Bahamas.

EUSTIS — Working to bolster aid efforts in the Bahamas following the destruction left by Hurricane Dorian, Habitat for Humanity of Lake-Sumter has partnered again with Lake County inmates on a project meant to provide aid workers with temporary housing.

They started the project Monday with inmates enrolled in the Inmate Construction Academy and supplies donated by RoMac Building Supply. The plan, described by Habitat’s Senior Director of Development Danielle Stroud as an experiment, is to turn shipping containers into temporary housing.

“We have two shipping containers that we purchased that we’re going to turn into housing units,” said Shari Kuck, Habitat’s marketing and communications coordinator. They won’t be complex structures or offer many conveniences to aid workers, but they’ll provide air-conditioned shelter for up 16 people.

“It’s just somewhere for them to lay their heads down,” she said.

Stroud said that the experiment started to take form before Hurricane Dorian ever struck the islands to the south. Habitat CEO Kent Adcock started talks proactively among their leadership team and partners to prepare for possible aid missions in Lake County.

When the Bahamas was hit and the storm skirted Florida, they looked at the damage and thought they should try to help.

“It just turned out that a lot of people in this community have a lot of ties there,” Stroud said.

Some of their partners have homes in the Bahamas, she said, but are in a position where they are able to live without them or to rebuild them while they remain in Florida homes. Those partners wanted to focus on how to help out native Bahamians who lost a great deal more in the storm.

Hurricane Dorian hit parts of the Bahamas as a Category 5 hurricane.

To them, that meant providing infrastructure for the people on the ground helping in the Bahamas. They bought the containers and got to work.