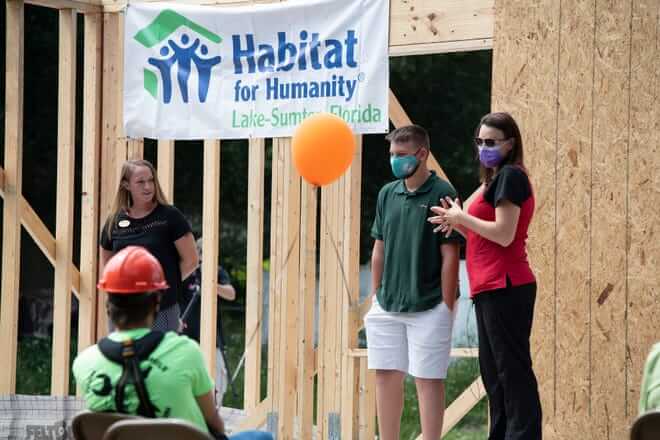 The recipients of the home, Jessica Smith and her son, Otto, are introduced to the Leesburg High School Construction Academy who will be building the home for the Habitat for Humanity project in Leesburg on Monday Sept. 21 [Cindy Peterson/Correspondent] Cindy Peterson

The Nov. 13 premiere showcased the new project to be built by 14 Leesburg High School students — known as the Dream Team — and the family who will benefit from their work. This season debuted a full month earlier than the first season, which initially aired its first episode on December 16, 2019.

The new season of the show includes updated graphics and an opening video which features clips of students working. As before, it’s hosted by the CEO of RoMac Building Supply, Don Magruder. RoMac is one of the show’s sponsors, and Magruder has been involved as a community advisor for the Leesburg High School Construction Academy for the past few years.

This season of Habitat Academy is starting off with extra ambition, and the benefit of partnerships and knowledge developed over the course of last year’s production.

Red Apples Media President Marc Robertz-Schwartz said after the conclusion of last season that he and his crew learned a great deal while producing the show, including about how to schedule the show.

Season one was a couple episodes short of its projected run due to the rate the house reached its milestones, Robertz-Schwartz said. They couldn’t ask the construction team to hold off on a milestone for filming, for instance, so it was hard to capture every planned moment.

Still, with that experience under their belt, Red Apples is going in for a longer season this year.