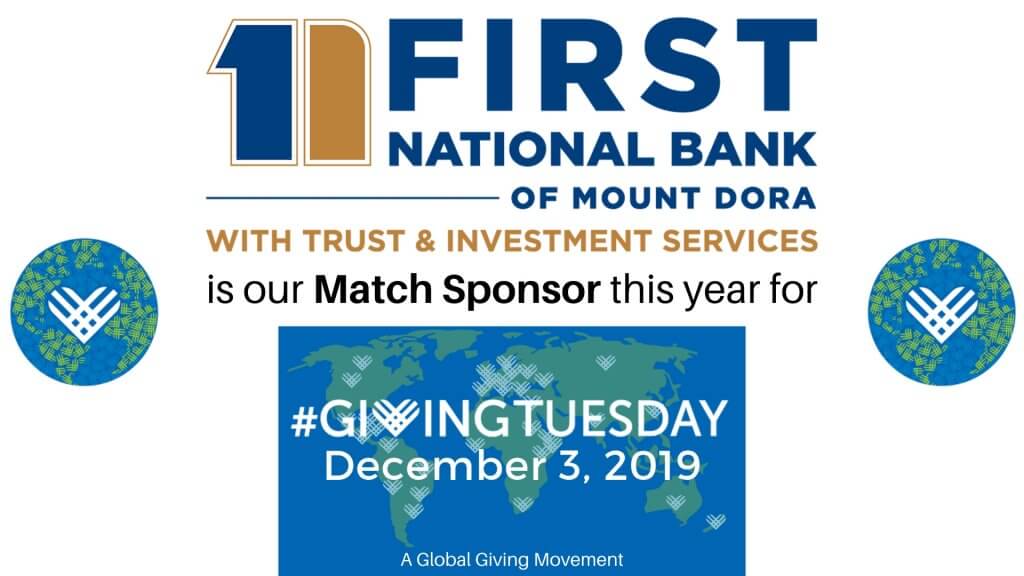 Any organization that continues to thrive after nearly 100 years of service to their community has earned the right to be called a fixture of that community. However, First National Bank of Mount Dora has also earned the right to be called a “member” of our community, a distinction clearly defined by their engagement in philanthropic endeavors and their eagerness to serve the area’s residents well beyond the walls of the banks they operate throughout the Golden Triangle.

First National Bank of Mount Dora is building upon their legacy of giving back to the community by sponsoring the construction of a new home to be built for a family in Eustis, FL. In addition, they have graciously agreed to be Habitat for Humanity’s Holiday Match Partner, matching any donations given to Habitat for Humanity of Lake-Sumter between December 3rd and December 31st, up to $75,000.

The bank’s President, CEO and Vice Chair of the Board, Bob White, says the bank’s commitment to the community is part of their identity, having never strayed from the vision of their founders to remain an independent community bank. “We work and live in Mount Dora and the Golden Triangle area,” says White. “And we are pleased to be able to support our community in many ways, through the participation of our board and our employees.”

As it has been since the beginning, the board, management, and staff of The First National Bank of Mount Dora are members of the community, and the bank continues to be locally owned and operated. Now in its fourth generation of leadership, the executive team at First National grew up in the bank. White himself was born in Eustis and attended school in Mount Dora. And, as is the case with First National Bank, it’s often seen that organizations with a foundational connection to the community are among the first to give back when called upon to do so.

White noted the bank has been deeply involved in the community since the very beginning. “Employees have served on numerous boards and organizations including local Chambers of Commerce, Hospital boards and committees, Community Redevelopment agencies, Junior Achievement and the list goes on,” said White. “Donations have been as much in time and hours as monetary.  That involvement is something we find extremely important.”

In addition to sponsoring a home and their generous financial support during the Holiday Match program, First National Bank of Mount Dora has signed on to participate in Habitat for Humanity’s first annual Jingle Build-Off on December 7th. This friendly competition challenges teams to build a custom playhouse based on the interests of the child assigned to their team. “We have a great group of employees that are excited about being able to provide a child with a playhouse,” says White, who also shared that the bank expects to have more than 75 volunteers signed up to help build the home in Eustis during 2020.

White says he and the rest of the bank’s leadership team has always been proud of the level of participation of their employees. “Community involvement is encouraged, and we believe it’s something that comes naturally in great employees which in-turn translates into a great banking experience and a great bank.”

Through the generosity of the bank, its employees and those that participate in the Holiday Match program, Habitat for Humanity will be able to share the gift of home ownership with another deserving family in our community. Sponsors like First National Bank of Mount Dora not only make an impact on their own, but they encourage and enhance the impact of so many others and for that we are thankful to have them as a both a fixture and member of our community.

Double your holiday donation to Habitat for Humanity by clicking here and entering “Holiday Match” in the comments section.