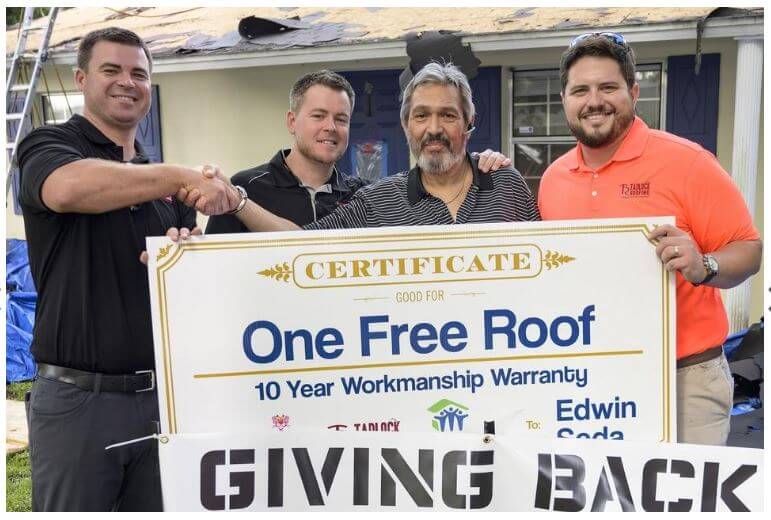 EUSTIS — Veteran Edwin Seda, 63, woke up Monday morning to the sound of banging on his roof. With a sigh of relief, he knew it was the day some of his troubles would come to an end.

Seda was chosen as the recipient of the Owens Corning National Roof Deployment Project, which works with Tadlock Roofing and Habitat for Humanity in granting new roofs to veterans in need.

“It makes me feel like crying,” Seda said. “But a good soldier never cries. I’m so thankful for good people like this.”

Seda served 20 years in Army intelligence, retiring in 1995. Because of his extensive training, two years ago he was asked to come out of retirement to help train Air Force pilots on A-10 Warthog aircraft.

However, a terrible accident occurred during training and his plane plummeted to the ground. He spent nine months in a coma. He broke a hip and a knee, and the visor from his helmet lodged into his skull.

“When I woke up, all I could think of was, ‘What the hell happened?’ ” Seda said.

Seda remembers another plane hitting the top of his canopy and him trying to remove the seat belt, but he doesn’t remember ever deploying the parachute.

“Obviously I did or I wouldn’t be alive,” he said. “But I don’t remember much after being hit.”

Since then, his medical bills have been piling up, even on top of his insurance coverage. To top it off, his home insurance company was pushing him to get a new roof or he would lose coverage.

He reached out to Tadlock Roofing for a quote, but they had another idea: Tadlock reached out to Owens Corning about their deployment project, then Habitat for Humanity to see what could be done.

By Cindy Sharp / Correspondent of The Daily Commercial