Club builds its First Home for a local Family in Need 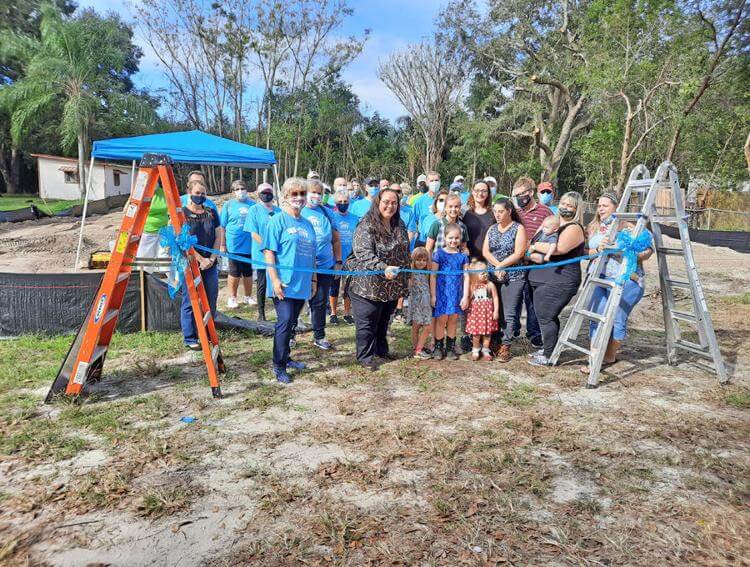 Joyce Tohill broke into tears as she walked up to the site where her new home was to be built.

This would be the first home the Tavares resident has owned, and it’s all thanks to Habitat for Humanity of Lake Sumter The Villages Club.

On Friday, club members gathered with Tohill’s family, and Habitat for Humanity staff at the location in Fruitland Park, where the home is going to be built, to celebrate breaking ground. When Tohill arrived, she was immediately overwhelmed by the support of everyone present.

“I’ve assisted with The Women’s Build for Habitat of Humanity,” she said. “But it’s different when you are the one receiving the home.”

After a ribbon-cutting, members celebrated with cake, muffins, juice and coffee and began discussing plans for the build.

“This is the first new build for the club,” said Sally Read, co-president for Habitat for Humanity The Villages Club.

“We are really excited and we will be doing all the decorating for the house as well. The Dream Team consists of several of the guys, and they will act as managers throughout the build so we thought it was the least us ladies in the club could do,” said Read, of the Village of Tall Trees.

Kevin Tucker, president of Habitat for Humanity The Villages Club, said everything was on track.

“The concrete will be poured Monday, and we can get started on the build by Wednesday or the following Monday,” he said. “We are so thankful we are able to provide a home for this family.”

Danielle Stroud, senior director of programs and partnership for Habitat for Humanity, said she was thankful to work with each family that benefits from the group.

“Four out of 10 families make under $30,000 a year,” she said. “So when these volunteers are out swinging hammers, they are the voices making a difference for our local families. I am so thankful Joyce and her family will be blessed and have a home to call their own, because they deserve it.”