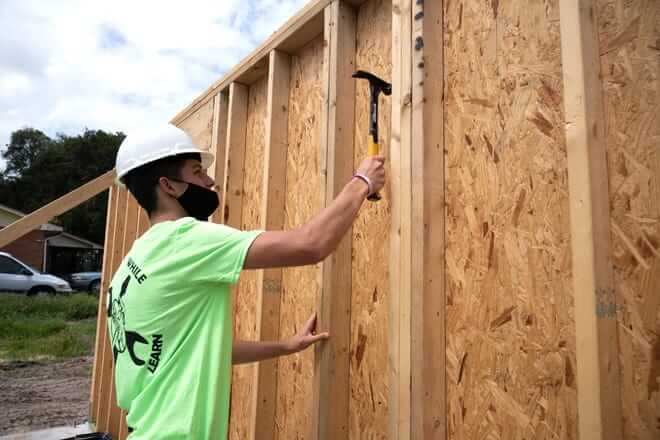 A student from the Leesburg High School Construction Academy works on construction a home for Habitat for Humanity in Leesburg in 2020. Cindy Peterson/Correspondent/File Photo

Four years ago, when the Lake County School System and the Villages Charter High School started making plans to start construction academies, students who wanted to pursue not college-bound programs in construction had no place to go.

It was also during this time in which educators and political leaders began to really discuss the value of a college education and if it would leave the student with unimaginable student debt for a mid-level career. It wasn’t hard to figure out that good-paying jobs in construction were plentiful, and if properly trained in high school or technical school, students could walk into some amazing job opportunities.

The number of students who signed up initially for the academies were low and everything had to be setup and organized. Nevertheless, strong public-private advisory boards started guiding the way, and along with a partnership with Habitat for Humanity of Lake-Sumter students began working on real projects and learning real skills.

Building houses and preparing students for great careers was no longer a dream, it was happening. Every academy started seeing excitement, and growth, along with summer jobs through the Academy of Construction Technologies program. Also, with a little help of video promotion of the projects, the programs at all the locations have taken off.