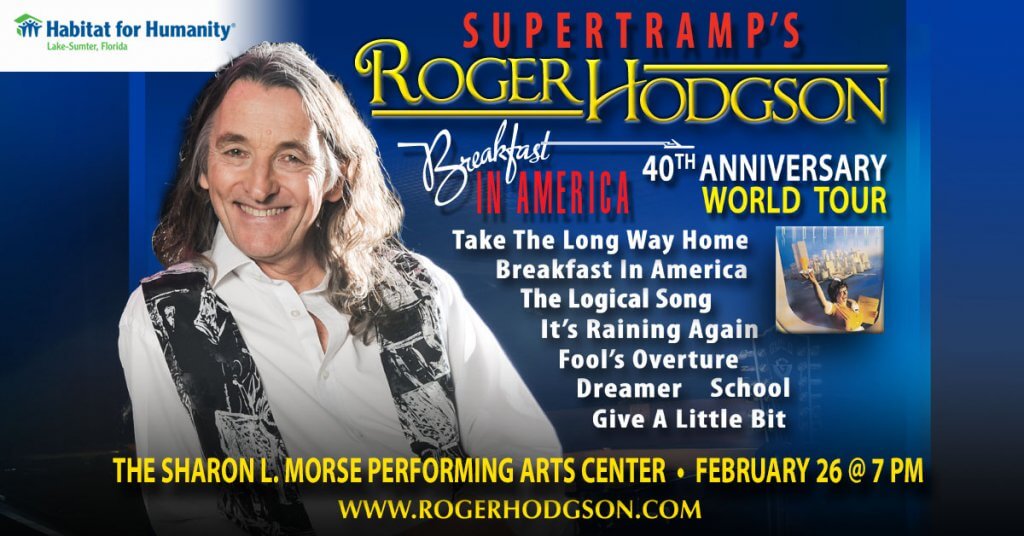 Roger Hodgson is recognized as one of the most gifted composers, songwriters and lyricists of our time! Hodgson co-founded the progressive rock band Supertramp in 1969 and was with them for 14 years. As the legendary voice, writer and arranger of most of Supertramp’s greatest hits that led to more than 60 million record sales, he gave us amazingly enduring songs such as “The Logical Song,” “Breakfast in America,” “Give a Little Bit,” “Take the Long Way Home,” “Dreamer,” “It’s Raining Again,” “School,” “Fool’s Overture” and so many others that have become the sound track of our lives.

Hodgson has twice been recognized by ASCAP (American Society of Composers, Authors, and Publishers) for his songs being in the top played songs in their repertory, proving that they have indeed stood the test of time.

“The highest compliment that Roger can be paid is that he probably sounds better live today than in the recording studio more than a generation ago.”
– Evening Standard – London, Review from The Royal Albert Hall Concert.

“There are few vocalists instantly recognizable from the first few bars of a song but Roger Hodgson is certainly one of that unique group. The singer/songwriter of Supertramp, his voice is as unmistakable as the distinct keyboard sound of his early hits.”

– The Times- London, Review from The Royal Albert Hall Concert.

Get Off the Bus “Great Concerts For Great Causes”